Way Off the Road: Discovering the Peculiar Charms of Small Town America 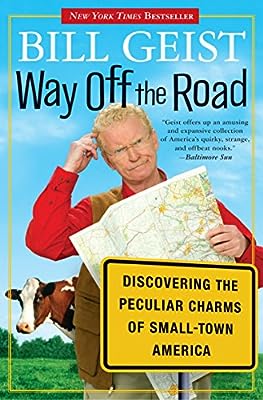 Price: $13.95
As of 2021-01-14 22:14:02 UTC (more info)
Product prices and availability are accurate as of 2021-01-14 22:14:02 UTC and are subject to change. Any price and availability information displayed on http://www.amazon.com/ at the time of purchase will apply to the purchase of this product.
Availability: Not Available - stock arriving soon
Buy Now from Amazon
Product Information (more info)
0 0
CERTAIN CONTENT THAT APPEARS ON THIS SITE COMES FROM AMAZON SERVICES LLC. THIS CONTENT IS PROVIDED 'AS IS' AND IS SUBJECT TO CHANGE OR REMOVAL AT ANY TIME.

Celebrated roving correspondent for CBS News Sunday Morning and bestselling author Bill Geist serves up a rollicking look at some small-town Americans and their offbeat ways of life.

“In rural Kansas, I asked our motel desk clerk for the name of the best restaurant in the area. After mulling it over, he answered: ‘I'd have to say the Texaco, 'cuz the Shell don't have no microwave.’”

Throughout his career, Bill Geist’s most popular stories have been about slightly odd but loveable individuals. Coming on the heels of his 5,600-mile RV trip across our fair land is Way Off the Road, a hilarious and compelling mix of stories about the folks featured in Geist’s segments, along with observations on his twenty years of life on the road. Written in the deadpan style that has endeared him to millions, Geist shares tales of eccentric individuals, such as the ninety-three-year-old pilot-paperboy who delivers to his far-flung subscribers by plane; the Arizona mailman who delivers mail via horseback down the walls of the Grand Canyon; the Muleshoe, Texas, anchorwoman who delivers the news from her bedroom (occasionally wearing her bathrobe); and the struggling Colorado entrepreneur who finds success employing a sewer vacuum to rid Western ranchers of problematic prairie dogs. Geist also takes us to events such as the Mike the Headless Chicken Festival (celebrating an inspiring bird that survived decapitation, hired an agent, and went on the road for eighteen months) and Sundown Days in Hanlontown, Iowa, where the town marks the one day a year when the sun sets directly between the railroad tracks

Along the wacky and wonderful way, Geist shows us firsthand how life in fly-over America can be odd, strangely fascinating, hysterical, and anything but boring.

“To say it very simply, freezer burn may very well have set in.” —neighbor on the frozen dead guy kept on ice in a backyard shed in Nederland, Colorado.

“Everybody loves a parade; we were just geographically challenged.” —David Harrenstein, organizer of a parade in tiny Whalan, Minnesota, where viewers are in motion and the “marchers” stand still.

“We haven’t lost anyone off these switchbacks in at least ten days” —Mailman Charlie Chamberlain, leading us on horseback 2,500 feet down the sheer walls of the Grand Canyon.

“Ours are the finest cow chips in the world today,” —Kirk Fisher, enthusiast, in Beaver, Oklahoma, world cow-chip capital and cow- chip exporter.

“It’s like drilling for oil; sometimes you come up dry.” —Gay Balfour, who sucks problematic prairie dogs out of the ground with a sewer vacuum in Cortez, Colorado.

“All you have to do is beat the flies to it,” —Michael “Roadkill” Coffman on the secrets of cooking with roadkill outside Lawrence, Kansas.

“It’s a gift; you either got it or you don’t.” —Lee Wheelis, world watermelon-seed-spitting champion, Luling, Texas.
“I am the mayor, the board, the secretary-treasurer, the librarian, the bartender —that’s my most important title —the cook, the floor sweeper, the police chief, and I have the books for the cemetery, if someone wants to buy a plot.” —Elsie Eiler, the sole citizen of Monowi, Nebraska.