Running To: In Search of Home On the Open Road 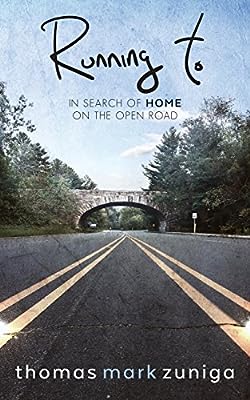 Price:
As of 2021-01-13 18:42:07 UTC (more info)
Product prices and availability are accurate as of 2021-01-13 18:42:07 UTC and are subject to change. Any price and availability information displayed on http://www.amazon.com/ at the time of purchase will apply to the purchase of this product.
Availability: Not Available - stock arriving soon
Buy Now from Amazon
Product Information (more info)
0 0
CERTAIN CONTENT THAT APPEARS ON THIS SITE COMES FROM AMAZON SERVICES LLC. THIS CONTENT IS PROVIDED 'AS IS' AND IS SUBJECT TO CHANGE OR REMOVAL AT ANY TIME.

Sometimes life falls apart. Sometimes it's worth running away; running to something, however, is far better.

Inspired by the likes of Donald Miller, John Steinbeck, and Jack Kerouac, Tom Zuniga hit the road in his Mitsubishi Galant, criss-crossing the continent in search of "home" — an elusive concept unrealized since his youth.

After publishing his first book of "messy memoirs," Tom received countless emails from readers around the world saying two things: "me too" and "come visit." He set out to meet as many of his readers as possible, and as he traveled he heard similar stories of loss, longing, and wrestling with issues of faith and sexuality.

For nearly a year, Tom's journey took him from the cities to the prairies, the mountains to the oceans, and solitary campouts to intentional community. Breaking from his safe Christian bubble, he came face-to-face with Mormons, ponytailed cult members, and a friendly nudist, reuniting with old classmates and campmates and meeting total strangers on Couchsurfing.

Somewhere along the course of 26,000 miles, Tom learned he's not as much of an introvert as previously thought. The longer he wandered, the more he pondered this notion of "home."

Perhaps true home couldn't be found this side of Eternity — or, perhaps it could.

Revved! Obsessions of a Midlife Motorcyc...