Hitching Rides with Buddha: Travels in Search of Japan 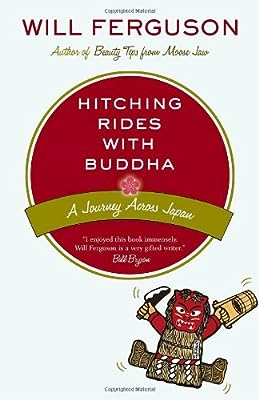 Price: $16.03
As of 2020-08-07 02:34:59 UTC (more info)
Product prices and availability are accurate as of 2020-08-07 02:34:59 UTC and are subject to change. Any price and availability information displayed on http://www.amazon.com/ at the time of purchase will apply to the purchase of this product.
Availability: Not Available - stock arriving soon
Buy Now from Amazon
Product Information (more info)
0 0
CERTAIN CONTENT THAT APPEARS ON THIS SITE COMES FROM AMAZON SERVICES LLC. THIS CONTENT IS PROVIDED 'AS IS' AND IS SUBJECT TO CHANGE OR REMOVAL AT ANY TIME.

Originally published as Hokkaido Highway Blues, with limited distribution in Canada, Will Ferguson’s classic book about Japan, for all fans of the bestselling Beauty Tips from Moose Jaw.

With the same fervour they have for outlandish game shows and tiny gadgets, the Japanese go nuts each spring when the cherry blossoms sweep from island to island towards the country’s northerly tip. Will Ferguson was celebrating the event in the standard fashion. And after way too much sake he announced he would be the first person in recorded history to follow the blossom’s progress end to end. To make it a challenge worth doing, he’d hitchhike all the way: relying on the kindness of some very weird and wonderful strangers.

Mixing his penchant for biting observation with wicked humour, Ferguson starts at the southernmost tip of Cape Sata and heads north for distant Hokkaido. Whether he is doing the forbidden and not knowing it, or holding "conversations by non sequitur," it is a journey full of misadventures and revelations. The resulting travelogue is one of the funniest and most illuminating books ever written about Japan.


To make matters worse, I decided to hitchhike. Striking a heroic stance, I declared my intention to my Japanese friends to become the first person ever to hitchhike the length of Japan, end-to-end, cape-to-cape, sea-to-sea. This did not impress them as much as I had hoped.

“Why would you want to do that?” they asked, genuinely puzzled. “There is no reason to hitchhike. That’s why we built the Bullet Train.”

Others worried about my safety. “But,” I would argue, “Japan is a very safe country, is it not?”

“So why shouldn’t I hitchhike?”

“Because Japan is dangerous.”

Now, I will admit that mooching rides across Japan is not a major achievement — I mean, it’s not like I paddled up the Amazon or discovered insulin or anything — but I am the first person ever to do this, so allow me my hubris.

When I left my home in Minamata City aboard a southbound train, I felt suitably bold with my backpack and muscular thumb.

“I’m going to hitchhike the length of Japan,” I told the man beside me.

He smiled and nodded.

He smiled again, and soon after changed seats.
—from Hitching Rides with Buddha


From the Hardcover edition.