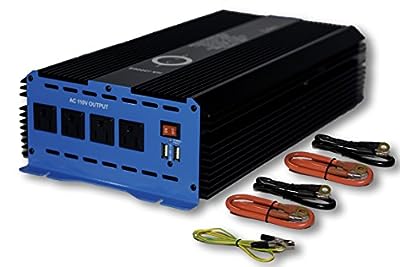 Please choose from the options above to see price and availability.

Product Information (more info)
0 0
CERTAIN CONTENT THAT APPEARS ON THIS SITE COMES FROM AMAZON SERVICES LLC. THIS CONTENT IS PROVIDED 'AS IS' AND IS SUBJECT TO CHANGE OR REMOVAL AT ANY TIME.

Power inverters were created for the purpose of converting 12-volt DC power (12-volt battery) to 120-volt AC power (wall Outlet), allowing an electronic device to be plugged in and operated just as if it were being used in the house. What Can I Power with My Power Inverter? Halo Power Inverters range from 200 watts to 3000 watts, with the right wattage you can power just about anything, from cell phones, iPad, to skill saw, microwave, air conditioners, Refrigerator, power tools. Emergency Home Back Up Power A very simple way to use an inverter for emergency power (such as during a power outage), is to use a car battery (with the vehicle running), and an extension cord running into the house, where you can then plug in electrical appliances. The size you choose depends on the watts (or amps) of what you want to run (find the power consumption by referring to the specification plate on the appliance or tool). We recommend you buy a larger model than you think you'll need (at least 10% to 20% more than your largest load).