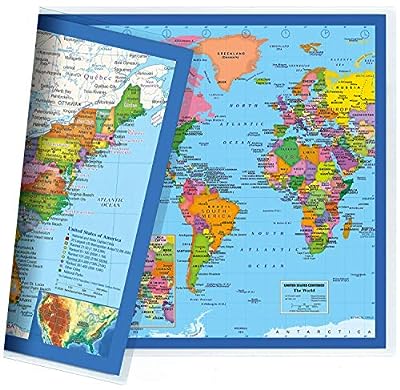 View eBay Options
In Stock.
Product Information (more info)
CERTAIN CONTENT THAT APPEARS ON THIS SITE COMES FROM AMAZON SERVICES LLC. THIS CONTENT IS PROVIDED 'AS IS' AND IS SUBJECT TO CHANGE OR REMOVAL AT ANY TIME.

THIS MAP FEATURES A U.S. CENTERED WORLD MAP ON ONE SIDE AND A U.S. MAP ON THE OTHER. THE WORLD MAP IS A REVOLUTIONARY MAP THAT PUTS THE UNITED STATES IN THE CENTER. Why does this matter? The traditional world map misrepresents the relationship between the U.S. and the Asia-Pacific region by separating them to opposite sides of the map; our teachers can’t even show the Japanese attack on Pearl Harbor during WWII on the traditional world map. Only on the U.S. centered world map can we easily see the shortest route from the U.S. to any place in the world. THE ASIA-PACIFIC REGION IS THE FASTEST GROWING AREA IN THE WORLD. It contains 60% of the world’s population and 8 of the G20 countries, where the U.S. does 40% of its import and export business. This U.S. centered world map much more powerfully helps us to understand the importance of partnerships and challenges that the region offers to the U.S. THE WORLD MAP CONTAINS AN INSET OF EUROPE AT A LARGER SCALE, TO MAKE IT EASY TO READ. THE U.S. MAP FEATURES MORE THAN 350 LARGEST U.S. METROPOLITAN AREAS. Ranking by population of metropolitan areas rather than individual cities more meaningfully represents the relative size of the cities. The US map has an inset US relief map to show topographic features as well. The world map is the best world map for all Americans, especially our young generation, because it gives us a more balanced view of the world. THIS IS A GREAT GIFT FOR ALL AMERICANS, ANYTIME!

Around The Globe - Must See Places in No...