Between the Rockies and a Hard Place: A drive along the 100th Meridian from Mexico to Canada 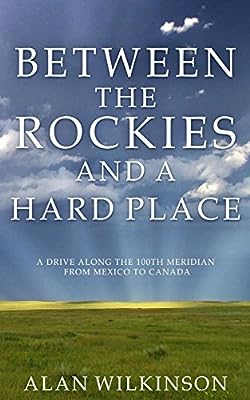 Price:
As of 2021-01-19 04:04:04 UTC (more info)
Product prices and availability are accurate as of 2021-01-19 04:04:04 UTC and are subject to change. Any price and availability information displayed on http://www.amazon.com/ at the time of purchase will apply to the purchase of this product.
Availability: Not Available - stock arriving soon
Buy Now from Amazon
Product Information (more info)
0 0
CERTAIN CONTENT THAT APPEARS ON THIS SITE COMES FROM AMAZON SERVICES LLC. THIS CONTENT IS PROVIDED 'AS IS' AND IS SUBJECT TO CHANGE OR REMOVAL AT ANY TIME.

I first published my account of a drive up (and down) the Hundredth Meridian in 2012. It was an e-book, Toad's Road-Kill Café. I now re-issue it under a fresh title, and in paperback form, because I felt the original contained a lot of superfluous matter. Also, I felt that some of the people mentioned within its pages might be recognisable, and I would prefer it otherwise. This new edition is leaner and, like all my publications now, has been professionally copy-edited.

The book describes a road-trip through six western states between the Mexican border and the Canadian. I always knew that the 100th was supposed to be a dividing line between corn and cattle, sod-buster and cowboy. I also knew that the landscape it passes through was pretty empty. I wanted to see for myself who lived out there, what they were doing, and whether the supposed divide was palpable. And because those lands were largely settled by pioneers during the great homesteading period, I wanted to see what was left of those family farms.

So I went and talked to people. I slept in a bunkhouse on a small spread in the Texas Hill country; I camped; I stayed in a haunted house built by an Englishman along the Solomon river, was invited to stay with a retired teacher in Pierre South Dakota, and toured the Standing Rock reservation until I found some Natives to talk to.

I met some entertaining characters and gathered some remarkable stories. I got to know something of the landscape and its history. I met far too many people, businesses and towns that were failing; so did I ever come across a farm where that particular American Dream, that of the homesteader wanting to provide for his or her family, had been lived to the full? Well, maybe you'd care to read the book and find that out for yourself.

The Ultimate Baseball Road-Trip: A Fan's...